How far could CRE Values Drop?

We watched stocks drop significantly in value over the last month with the S&P 500 losing about 30% of its value.  Many businesses have shut down at least temporarily and there is significantly less household spending on goods and services which could lead to a consumer led recession.  Occupancy of many properties is likely to be impacted which in turn is likely to result in lower rental rates, NOI and ultimately property values.  The question is how far property values might fall?  No one really knows, but we can look at the past history of recessions and see how they impacted CRE, keeping in mind that the cause of each has been different with none having been precipitated by a virus.

A recent note from UBS Financial Services, Inc. looked at the impact of past recessions on stocks. For the most recent financial crisis leading to what has been termed the Great Recession, the calendar year return was as low as a negative 33% and there was an intra-year downturn of as much as 48% during 2008.   Should we expect a similar decline in the value of commercial real estate?  To answer this question, Jeffrey Fisher recently looked at how the past recessions impacted the value of properties in the NCREIF property index which tracks over a half trillion dollars of institutional real estate (apartment, hotel, industrial, office, and retail).   REITs have been added to that analysis.   The index starts in 1978 and thus captures several recessions including the most recent financial crisis. 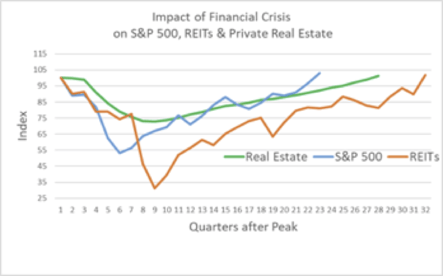 While we can’t say that history will necessarily repeat itself, this may give us some clue as to what to expect for commercial real estate based on what happens to the stock market over the next year.  The drop we have seen so far has been somewhat similar to that of the financial crisis.  But we don’t have any evidence yet as to where real estate values will end up this quarter.  It is something we will be tracking closely.

[2]Impact of Recessions on CRE Values: Lessons from the NCREIF Index. https://www.ncreif.org/globalassets/public-site/covid19/fisher-impact-of-recessions-on-cre-value-2020-03-24.pdf.  REITs added to the above exhibit.